Cumbria County Council were inspired to undertake a city-wide lighting initiative in 2020. As part of this – new luminaires are being installed at key buildings within the city centre. 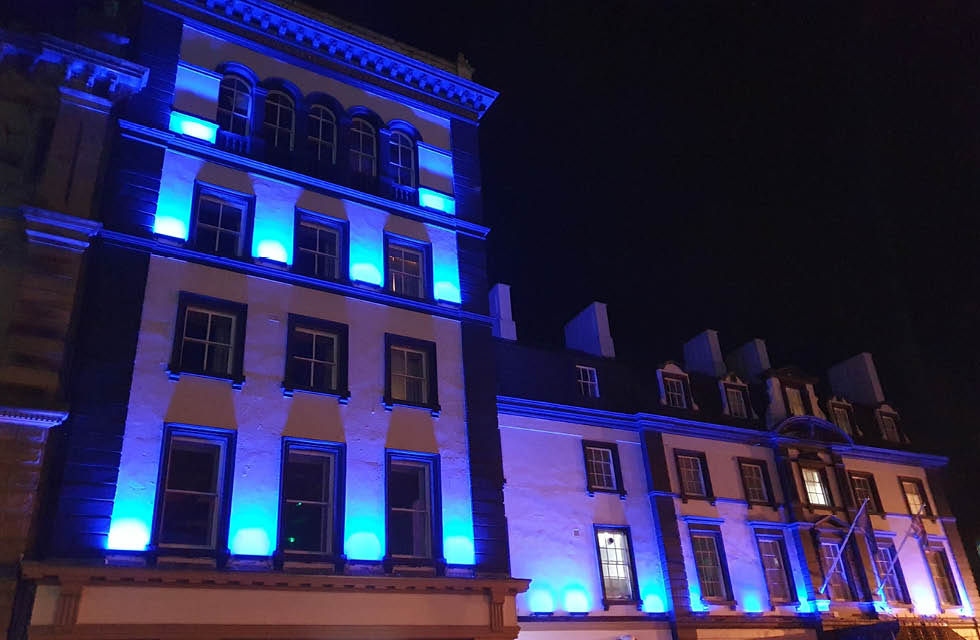 Explore the night – love the city

There are many reasons why cities should be lit, but doing it for people and tourism are two of the most significant.

Do it for the people

As urban populations grow around the world, there’s increasing investment in land, property and infrastructure. When councils and municipalities include architectural lighting in this investment, they’re helping to create a unique identity for their towns and cities. Whether it’s through lighting a heritage building or a modern structure, this investment allows locals to experience their home town or city at night in a way they may never have experienced it before, creating a sense of pride.

Do it for the tourists

Architectural lighting brings cities to life at night – enticing tourists into urban spaces and areas where there are shops, bars or restaurants, increasing that all important dwell time. It’s also a powerful marketing tool. As lighting offers a different perspective not just on architecture, but on landscapes, plazas and gardens – it can be used to differentiate one city from the next. For these reasons – lighting must be a key consideration in a city or town’s tourism strategy.

Carlisle is an English city located in the northern county of Cumbria, 10 miles south of the border with Scotland. By area, it is the largest city in England and, at over 2000 years old, it’s history is vast.

Established as a roman settlement serving forts on Hadrian’s Wall, it has also acted as a military stronghold during the middle ages and was once home to Mary Queen of Scots (who was imprisoned in Carlisle Castle).

In the 12th century, Henry I established a priory in the town which in 1133 became a cathedral, turning Carlisle into a city. In more modern times, the city has been better known for its textile and rail industries.

Today, it’s a popular location for tourists as it’s sandwiched between two UNESCO world heritage sites – Hadrian’s Wall and the Lake District – with a visitor economy worth around £552 million. As well as the many historic venues to see, the city hosts all manner of art and cultural events, from guided tours, to ghost tours and comedy shows to musical performances.

One of the many events hosted in the city of Carlisle is the ‘City of Lights’ which was brand new for 2020. As part of a four-day event, locals and tourists visit a variety of lighting displays and installations. This year, the centrepiece was a space-themed exhibition at Carlisle Cathedral created by award-winning artistic collaboration ‘Luxmuralis’.

The City of Lights project involved not just Carlisle City Council and Cumbria County Council, but also a range of partners including the Railway Heritage Trust and Story Contracting.

When the ‘City of Lights’ ended, it was clear that locals and visitors were drawn to the local landmarks which had gone unnoticed in the daytime and they were taking greater pride in the buildings and structures around them.

For this reason, Cumbria County Council were inspired to undertake a city-wide lighting initiative. As part of this – new luminaires are being installed at key buildings within the city centre so that lighting becomes a year-round feature.

acdc have established a good relationship with Cumbria County Council’s Lighting Manager, Ian Harker, and have worked closely to achieve new schemes for Carlisle Citadel, railway station, station hotel and Griffin pub, with other projects including the Crown and Mitre pub also in the pipeline. These buildings are all located within a short walk of each other, creating a new urban destination that welcomes people at night.

A former medieval fortress, Carlisle Citadel’s two towers mark the entrance to the city. Designed to handle artillery, they’ve had many uses during their lifetime, including as civil and criminal courts and a prison. Thanks to English Heritage, they’ve been restored in recent times with the west tower now open to the public.

This year, they’ve been lit by pole-mounted FUSION floodlights which flank the Citadel’s perimeter, and BLADE Si linear fittings which graze its higher walls.

Carlisle’s railway station is a Grade II listed structure built in 1848 at a cost of £53,000. Designed by architect William Tite, it is neo-Tudor in style and features a sandstone two storey facade covered in roundels and plaques. It is located adjacent to the Citadel and today continues to be a busy line connecting Carlisle to cities around the UK. 12 BLADE Si fittings have been used to illuminate the station. The RGBW variants mean that different schemes can be applied to the facade to celebrate events or add interest.

Carlisle’s station hotel was designed by architect Anthony Salvin in 1852 and was built especially for a visit by Queen Victoria in 1853. The Queen, needing somewhere to stay overnight on a trip to Balmoral, could walk straight from her train carriage to her suite via her own private entrance. Decades later, the same suite was used by Prime Minister William Gladstone who addressed the citizens of Carlisle through his hotel window.

Most recently known as the Hallmark Hotel and now acquired by the Best Western chain, it’s a popular choice for tourists because of its central location. As part of the city’s lighting plan – the facade has been lit using 28 BLADE Si RGBW linear luminaires.

The Griffin, directly opposite the Citadel, has also been lit as part of this lighting project. A grand Victorian building, it was originally a bank, but became a pub in 1999 after a large renovation. The building is still full of character, featuring dramatic staircases and high ceilings on the inside, and ornate pillars and stonework on the exterior.

24 PLAZA Si RGBW spotlights were carefully and considerately added to the Griffin’s facade. The lighting on all of these buildings has been linked to the same Pharos control.

Available in three different lumen outputs, these luminaires are ideal for lighting bridges and stadia expertly highlighting the size and scale of a structure.There are a wide range of beam angles, colour temperatures and colour change options as standard, and the accessories which can be added provide greater glare control.

The FUSION floodlight’s lockable bracket has rotate and tilt adjustments, ensuring a precise and consistent focus on a project. Their modern, cast aluminium construction is finished in a corrosion-resistant powdercoat paint, ensuring the focus is always on the target structure, never the fitting itself.

The BLADE linear luminaire is available in four lengths with a choice of single colour and dynamic RGBW. BLADE provides an even wash of light beyond 12m, framing even the largest of structures and facades. Using one linear optic, there is a consistent lit effect (even when installed end-to-end) and the option of an internal anti-glare louvre maximises visual comfort. There are also four bracket options for the BLADE Si and Sx linear luminaires, from a simple 15 degree find adjustability, to a fully adjustable long arm bracket version.

In Carlisle, it was the BLADE Si that was used to illuminate a number of projects. The Si variant is a surface mount integral driver product which is designed to create amazing scenes on architectural facades and monuments.

PLAZA S is a family of surface mount adjustable outdoor spotlights that can deliver up to 3000 lumens.

With their minimalistic design, they blend seamlessly within the architectural and urban environment and an integral snoot behind the glass provides great glare control, but if that’s not sufficient, a cowl can also be added to the S12, 20 or 30i variants.

The PLAZA S is incredibly versatile, with a whole range of optics, colours and accessories to choose from to make sure the product is extremely well matched to a project.

'...it was clear that locals and visitors were drawn to the local landmarks which had gone unnoticed in the daytime and they were taking greater pride in the buildings and structures around them.' 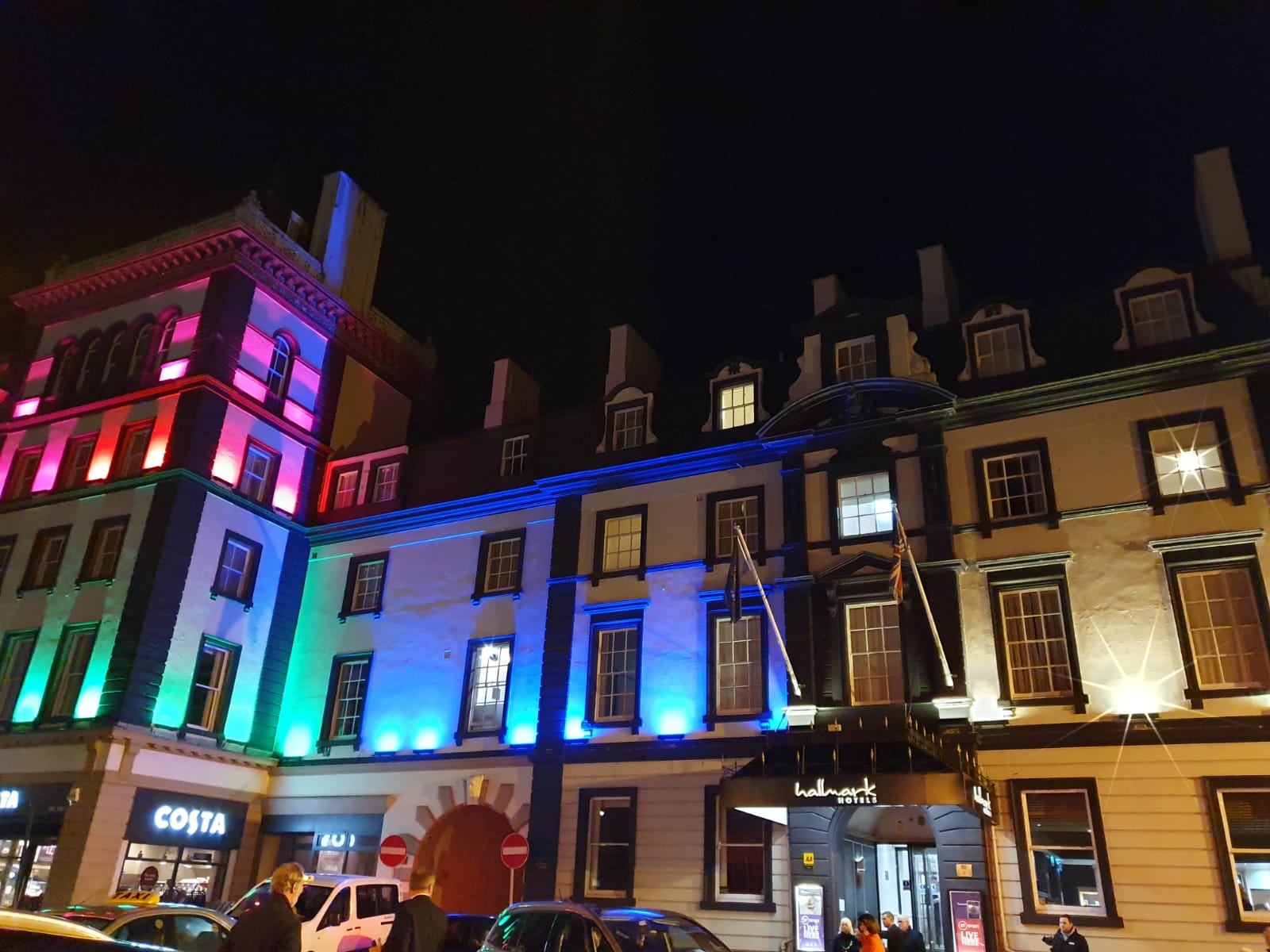